The Affenpinscher dog breed is a terrier like breed with long course hair.

They are good apartment dogs and can live about 10 to 12 years. They require minimal maintenance, a brushing once a week. The affenpinscher sheds very little if at all.

The Affenpinscher is a little breed of dog with a lot of personality. They have a face that somewhat resembles a monkey, that is why they have their name (Affen is a German word for monkey) In the country where the breed originated it is often called Zwergaffenpinscher (Zwerg means dwarf) so you might say that it resembles a small monkey dog. In France they named the Affenpinscher the mustached devil! But no matter what it’s name is, or what you call it, the Affenpinscher is a charming and often comical little breed of dog, it being the smallest of the Schnauzers and Pinschers breed. This breed tends to be alert, gentle, intelligent and very loving. Although keep in mind that they tend to be wary of strangers and make a good defensive show of guarding the house.

The Affenpinscher needs some exercise, but not as much as an active larger breed. Short walks will suffice but this breed will surely walk more if you are a willing participant. You should brush them regularly to keep their coat shiny and to avoid mating.

Regardless of the Affenpinscher’s origin it is a delightful breed to own. Friendly and loyal to the family and often lacking a knowledge of it’s small size when the family is threatened. It should provide years of loving companionship and countless hours of comedy relief.

The Affenpinscher breed standard for weight is 7 to 8 pounds (3-4 kg) and not to exceed 10.25 inches (26-27 cm) in height at the withers. This dog has has bushy eyebrows and shaggy hair which makes it look almost like a monkey. The coat is harsh and wiry with a medium length. The referred color of the Affenpinscher is black with other acceptible colors being tan, red, and dark grey. 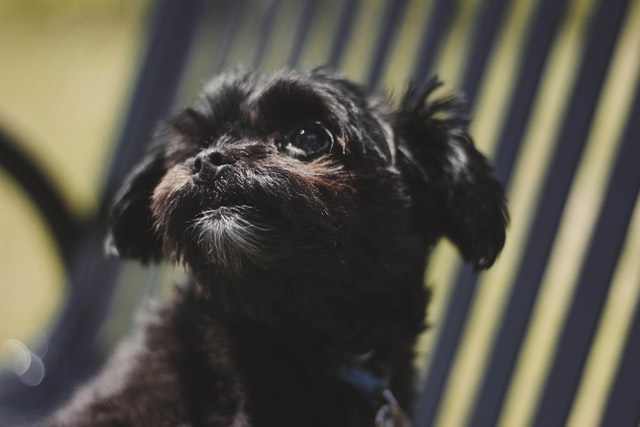 The Affenpinscher is an old European bred dog that is related to the terrier as well as the Brussels Griffon. It is belived the Affenpinscher’s original use was as a ratter and that the dog was much larger than it is today. As was the norm in Europe, it was eventually bred down to the current size.

These dogs are playful and inquisitive and make good apartment dogs since they can meet their exercise needs with indoor play. Like most small dogs, Affenpinschers require obedience training but also learn quickly and are quite smart. Affenpinschers do get along with children and other animals, but tend to protect their food and toys so care should be taken in this area.